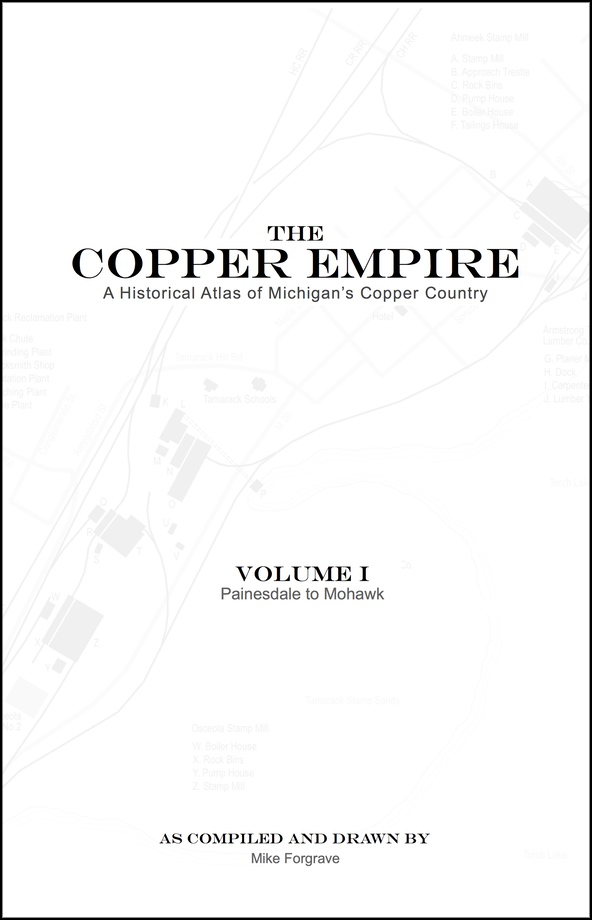 The Copper Empire (Volume 1) is perhaps the most comprehensive and detailed set of maps ever created showcasing this great copper empire in its prime. The maps were compiled from a collection of primary sources with historical information including Sanborn Insurance Maps™, USGS topographic maps, historic nautical charts, and old platt books as well as from a variety of on-line sources and over three years of explorations on the ground. The result is a compilation of over 50 full-page maps detailing every major mine, mill and rail-line that ever existed along the Keweenaw – a complete guide to the Copper Empire in its prime.

The Copper Empire (Volume 1) is concentrated along a 26 mile stretch of the Copper Range lying between Painesdale and Mohawk, divided up into 20 individual region maps centered around specific towns and mine locations. Each map consists of a current surface map overlaid with the historic rail lines, roads, and shaft locations that once existed in its place. These maps are drawn to an identical scale and include section lines, numbers, and township/range identifications.

Along with the twenty region maps are a set of 30 close-up maps which provide surface plant details for more than 37 individual mines and mills. These maps label not only the individual shaft locations themselves, but also the supporting structures such as hoist buildings, boiler houses, dry houses, and machine shops. These maps also label nearby public buildings such as schools, churches, and hotels. Along with the mines and mills, the close-up maps also provide detailed views of various industrial areas including the Houghton, Hancock, and Dollar Bay waterfronts.