Just outside of the old mining town of Mohawk lies a pair of peculiarly named roads cutting their way through the surrounding woods. Known today as Number Six and Number Five Roads these intersecting pathways serve to connect Mohawk with the neighboring mining community of Ahmeek. They get their names not from any standard naming convention but instead from what once could be found along their routes. Along the Number Five Road sat the surface plant to the Mohawk Mine’s No.5 shaft, while near the intersection with Number Six Road could be found the surface plant to the mine’s No.6 shaft.

Of course the mine has been abandoned for some time, and those sprawling surface plants that once lined the Number Five Road have been demolished and largely removed from the landscape. Yet some remnants do remain, and for those willing to take a little detour along the backroads to Mohawk a little bit of history can be easily seen from road.

The most impressive remnant found along the Number Five Road today is this concrete tower rising up above the trees on the road’s western end. Marking the location of the No.6 rock house, this industrial obelisk was a support pedestal serving the rock house’s drop hammer. The drop hammer was housed high up in the rock house’s upper reaches, thus requiring the tall tower of concrete to reach it. Due to its location within the rock house’s main rock bin the tower was additionally wrapped in a protective cocoon of iron.

Across the street from the tower sits something a little less extravagant – a simple concrete slab half buried in the dirt. Today its surface is traversed by recreational vehicles using the snowmobile trail but a century ago it was miner’s boots which walked across its surface. Back then it was serving as the floor to the No.6’s dry house.

Continue on eastward and a short drive brings to view yet another old remnant of the Mohawk Mine. This one sits a bit apart from the No.6’s main surface plant, but that’s understandable considering its purpose. This was one of the Mohawk’s powder houses, structures used to store explosives used in the mine. This particular powder house is built of rock and features its date of construction – 1915.

Traveling further still brings yet another curve in the road, this one marked by another large structure strangled up against the roadway. If one was to take a look at the base of the tower seen earlier, this structure would look very similar. A pair of parallel concrete pedestals mark the base of yet another rock house, this one belonging to the No.5 shaft. Though identical, this ruin’s towering obelisk has fallen and now lays on its side just next door.

Number Five Road sits just east of Mohawk. From Ahmeek follow US41 to the north for about a mile and then turn right onto the first paved road on the right (No. 6 Road). Follow this road up to the first dirt road to the left and turn down it. 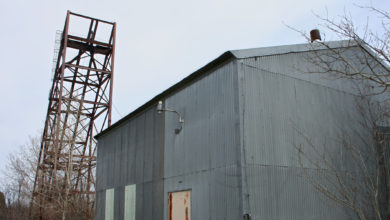 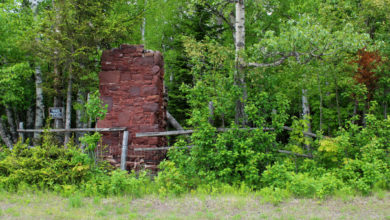 Ashes of the Phoenix 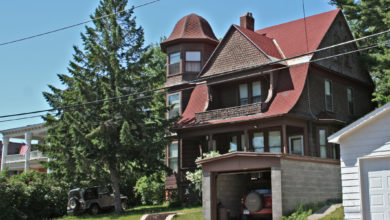